We were welcomed to Alder Hey in the same warm fashion as our first visit to Alder Hey in 2017 and there was a ‘buzz’ as soon as we displayed our promotional materials in the foyer. 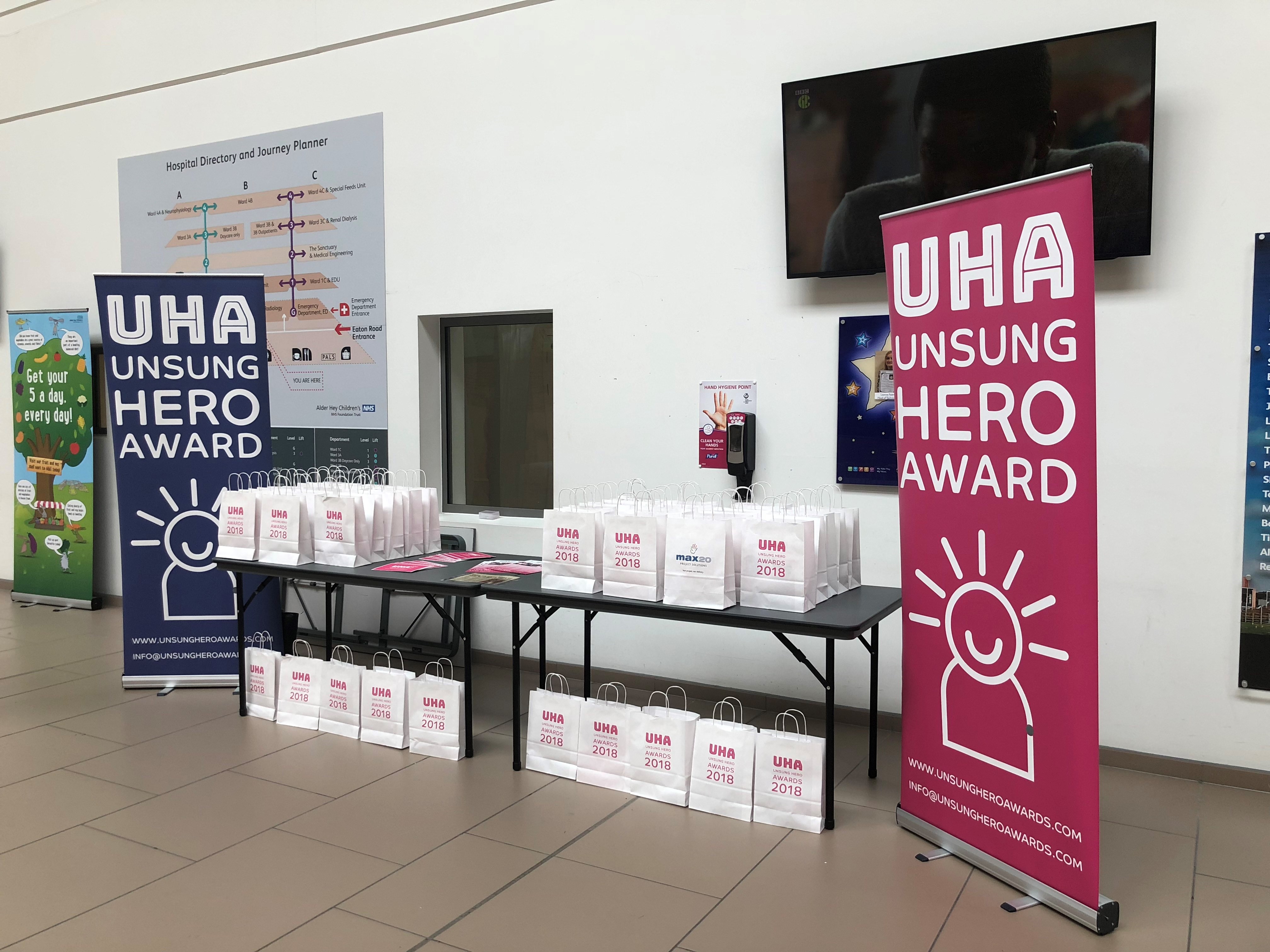 By mid-day we were ready to officially open our Awards and were welcomed by Chris Browne: Concierge, Past Nominee, Ambassador for Alder Hey and the UHA and Coronation Street star Anthony Cotton, along with mum Enid Dunn, past winner of the 2016 Awards.

Together our VIP’s cut the ribbon and officially launched nominations for Non-Medical/Non-Clinical staff and Volunteers of the NHS! The day was a great success and continued a strong partnership with the Trust, which saw Alder Hey as one of the top-ranking hospitals for UHA nominations in 2018.

Enid is no stranger to the Unsung Hero Awards. She won the ‘Volunteer of the Year Award’ for her truly unique way of helping women who had recently undergone chemotherapy, based on her own experiences when recovering from her Cancer treatment at the Royal Bolton Hospital some years ago.

On being discharged Enid had to carry around a drain in an unsightly carrier bag. A former dressmaker, she designed herself a fashionable bag that provided an opportunity for early mobilisation and dignity post-surgery.

Enid continues to voluntarily make bags for the many other patients who need them and delivers her creations to the Royal Bolton Foundation Trust at the end of each month. Enid was also a special guest at the 2018 Awards and will continue to be involved in Future Awards. 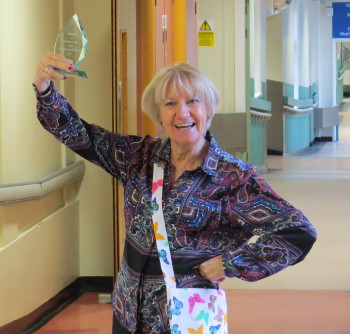 Enid Dunn with her 2016 UHA Trophy

Sandy Wilkie, Staff Engagement Lead at Royal Bolton NHS Foundation Trust said: “These bags are greatly appreciated by all the patients who are given them. Enid has made thousands of bags, maintaining a steady supply throughout the years complete with seasonal touches. Enid funds this service entirely out of her own pocket”.

Chris Browne was treated at Alder Hey as a boy and knew that he wanted to be involved in medicine from a very young age. Chris now works for the Trust as a concierge two days a week, and has volunteered at the Trust for around nine years and continues to give an additional two days of his time unpaid. He is known from ward to ward and can’t go too far without being stopped by a fellow patient or employee of Alder Hey and greeted warmly. 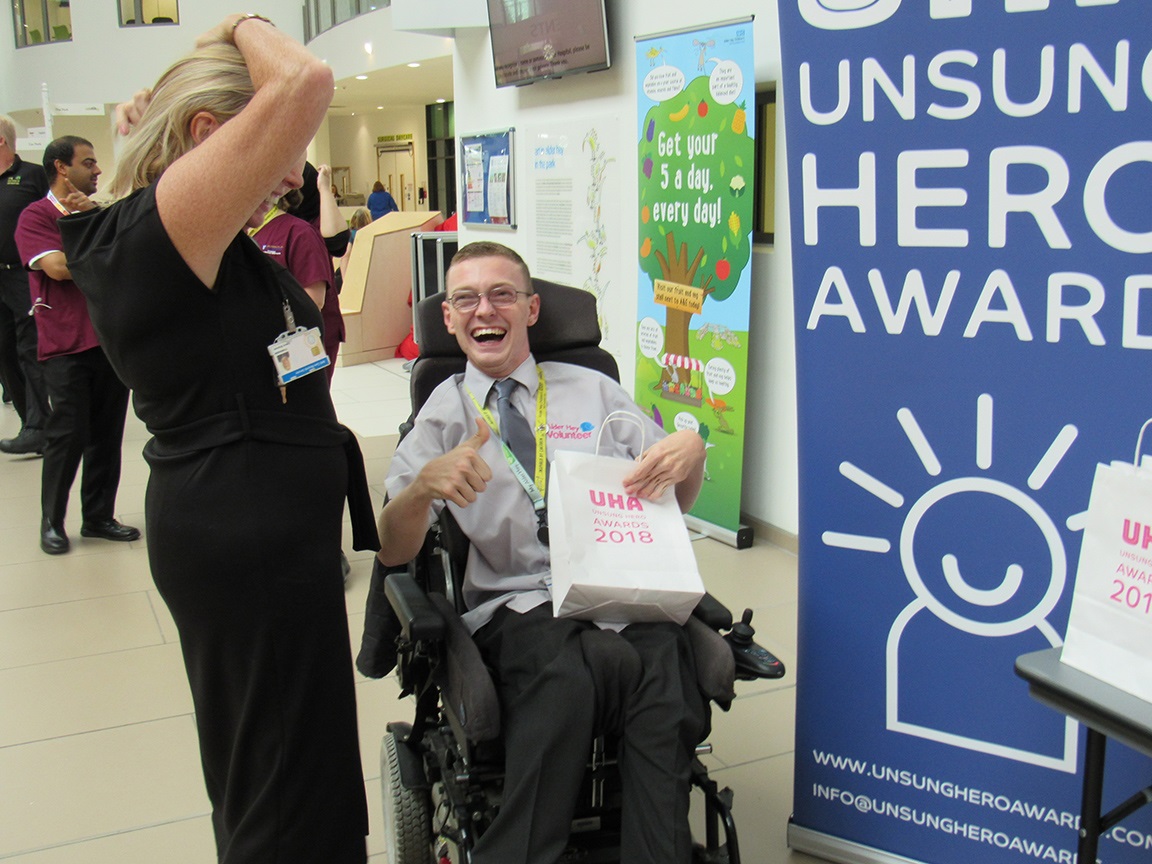 The team also made friends with Alder Hey’s Pets as Therapy Dog: Holly, who along with her owner provides hope and joy to children throughout the hospital. Holly was a treat to behold and fingers (or paws) crossed she will be nominated for an Unsung Hero Award herself! 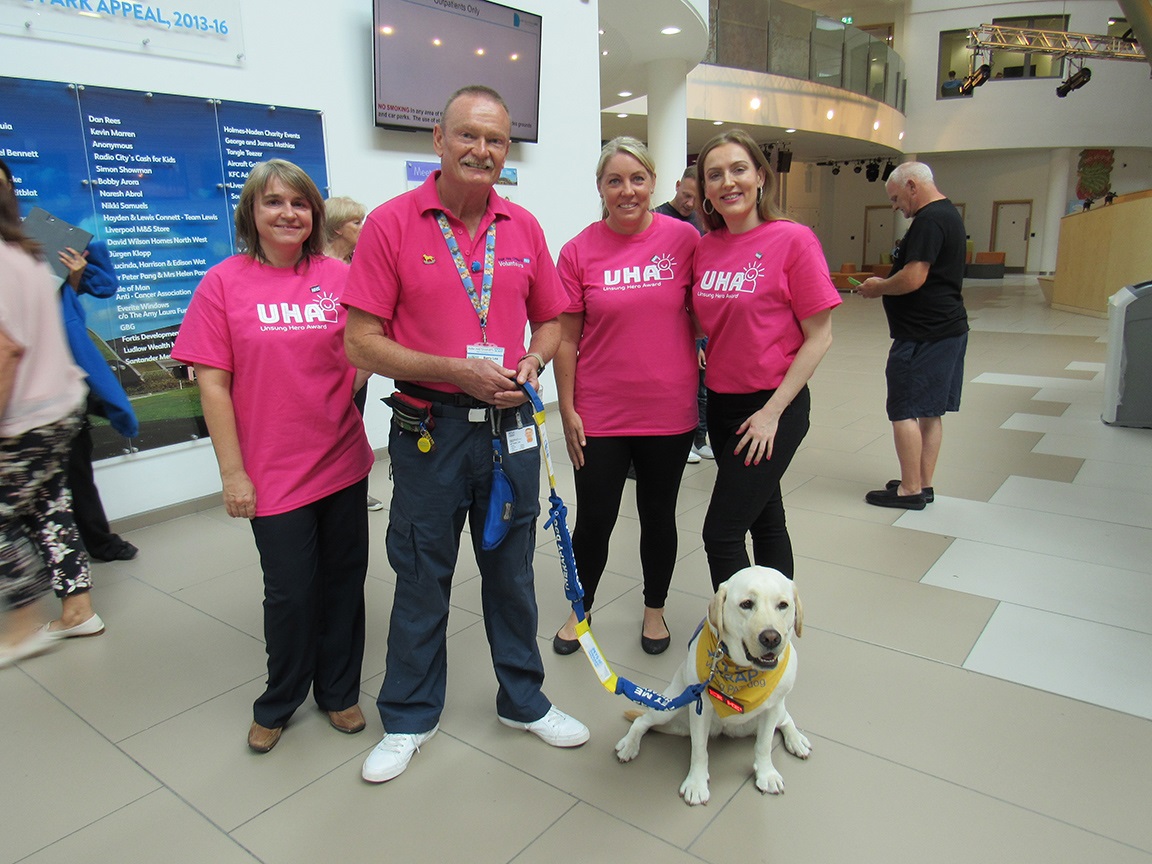 The Unsung Hero Awards fifth Annual Awards Ceremony with take place on Friday, March 1, 2019 at The Hilton, Manchester. Nominations are now open online and are free to enter. More information on nominations can be found here.

The Unsung Hero Awards is continually engaging with Trusts around the United Kingdom with aspirations to go ‘on tour’ in the near future. Watch this space for more info…