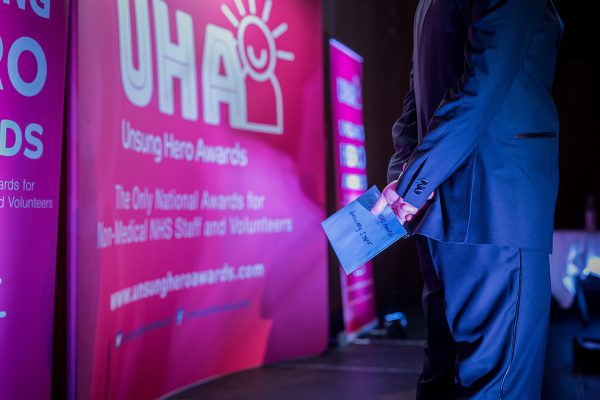 In Part 1 we saw guests arriving at The Hilton Hotel, Deansgate, Manchester to a Champagne Drinks Reception where close up Magician Ian Lavin and our Compere Don Tomlinson welcomed everyone to the 5th National Annual Unsung Hero Awards for NHS Non-Medical/Non-Clinical Staff and Volunteers….

The first half of the Awards focused on the following categories: Admin & Clerical, Estates & Ancillary, IT & Digital and Corporate Functions. As per last year, the winners of each were divided into: Everyday Hero, Leader of The Year and Team of The Year. Again, as we have come to expect our winners came from diverse backgrounds, from a winner with only six months of experience in the NHS, to a winner of 44 years worth of experience.

Winners from different geographical locations, ages and areas of speciality graced the stage and all were presented with a large glass trophy with their details printed in the classic UHA pink and purple.

More information on all the worthy category winners can be found here.

Once we had awarded our first set of winners it was time for dessert, teas and coffees. This was also the time when our audience was again treated to “magical” close up card tricks from resident magician, Ian Lavin, and up-beat music from our AV and Disco team “Neckem Entertainment”. 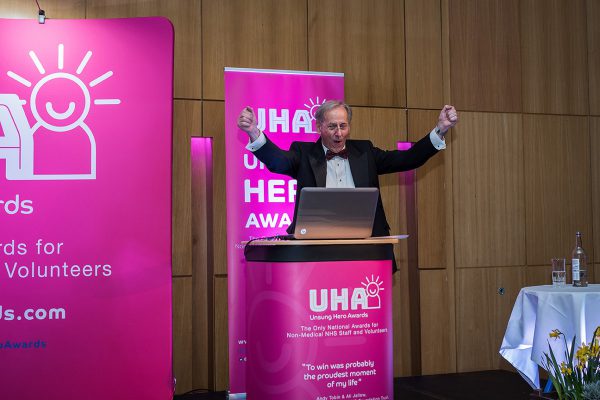 Before the individual awards continued, we had our second and final keynote speaker come to the stage and blow everyone away with his personal story. In 2006 Anthony Bennett contracted multiple viruses after a school trip to Disneyland Paris. Anthony was brought back to life a staggering TWELVE times by the NHS and while recovering, had to learn the basics again, such as how to walk, talk and use his hands. 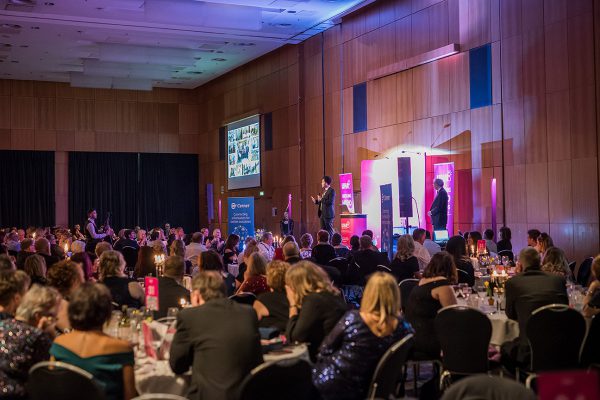 During this crucial time, Anthony reflected on how important all members of the NHS were to his recovery, whether it was the IT Specialists who designed digital programmes that enabled the medical equipment to treat him, the Cleaners who made sure he was always in a clean and safe environment, or the many other individuals who allowed him to come back, literally from the brink, stronger than ever, to start a new career as an inspirational speaker. 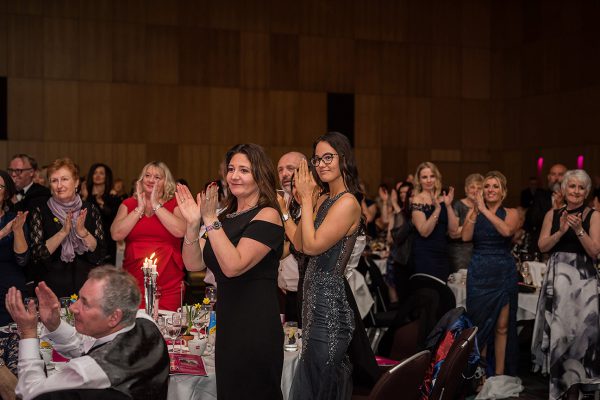 Then moving onto the Singular Awards, first up was the ‘Life Saver Award’, which went to Joanne Thompson who courageously saved the life of a new-born baby in of a car outside of The Princess Alexandra Hospital NHS Trust. Unfortunately, Joanne was not able to be in attendance on the night, but her Award is now with her and we heard it was met with shock and happiness in equal measure.

‘Patients’ Choice Award’ was won by Olivia Molyneux, from the South Western Ambulance Service, who patiently and professionally calmed an off-duty Police Officer during his 999 phone call when he thought he was having a suspected heart attack on a remote coastline in the South West of England.

‘Apprentice of The Year’ was won by Katie Claydon, from Barnsley Hospital NHS Foundation Trust, who not only sourced thousands of pounds worth of prizes for the yearly Trust raffle, but also supports her team in working much higher than her pay grade.

Eileen McMahon, from Luton and Dunstable University Hospital, won the ‘Lifetime Service Award’ in recognition of her 44 years of Volunteering at the Trust. Eileen continues to work closely with patients who have Facial Disfigurement and teaches them how to apply a type of make-up designed to help hide scars and facial deformities.

Our ‘Volunteer of The Year’ Award went to Mandy Preece, based at The Royal Bournemouth and Christchurch Hospitals NHS Foundation Trust and who rose up the ranks as a volunteer to now manage her own team of ‘end-of-life’ volunteers and presents the training programme to Macmillan.

The final Award of the evening – our ‘Special Mention Award’ – which was decided by the audience, went to Chantal Lockey. Chantal sadly lost her daughter to ‘Sudden Infant Death Syndrome’ and, as a result of receiving care she felt was below par, set up her own Foundation For Infant Loss Training in 2007. The foundation has gone on to great heights, including training thousands of people in the NHS and related organisations, including Universities.

Again, a full breakdown of our winners can be read here.

Please look out for our final instalment next week…