The Awards that nearly never were!

Last Friday marked the 2021 Awards at the Marriott V&A Hotel in Manchester. A venue that we had only been connected to for around five hours as our guests started to arrive. In fact, the 2021 Awards had been booked months in advance to take place at the Museum of Science and Industry (MOSI) in Manchester. Not a venue that was far from the V&A in terms of distance; but a venue that was many miles away in terms of appearance and meaning. 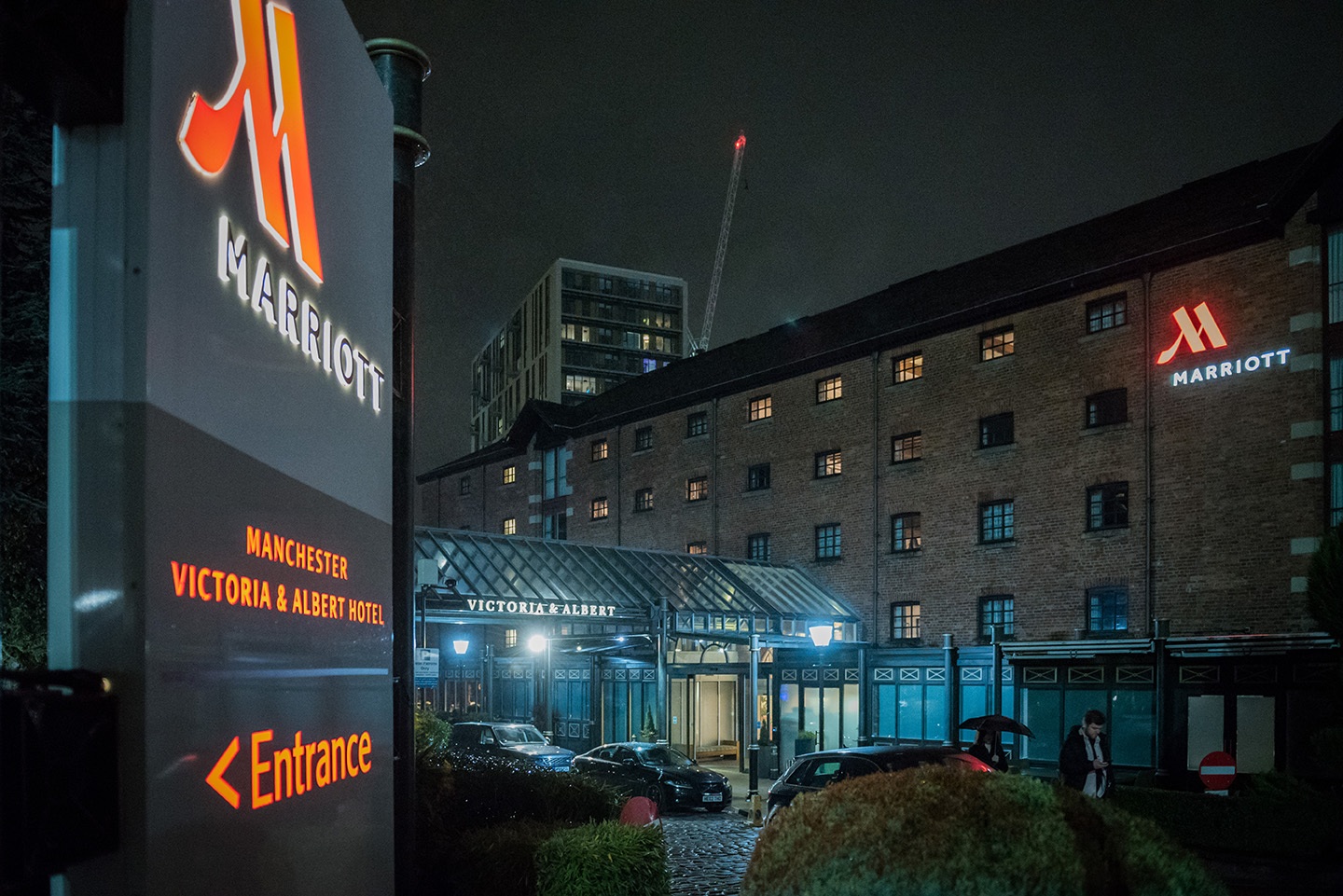 The original venue had been specifically chosen because of its scientific history – something that tied in perfectly with the NHS. Unfortunately, because of an internal problem with communication, leading to delicate Electrical work being carried out at the Museum close to the event. This resulted in a fateful loss of electricity on the night and a suspected power leakage, meaning that the venue had to be shut down to the public and to our guests and sponsors on the afternoon of the Awards!

To say that the 2021 Awards nearly never were, is completely accurate, as we were incredibly fortunate to have the Marriot V&A Hotel (the closest event space that was operational to MOSI) open its event doors to us at the eleventh hour. This was thanks to our Marketing Agency and a force to be reckoned with – Beccy Gibson, Director at Tempt Marketing. Something we will forever be grateful for: both to Beccy and to the Marriott V&A Hotel. 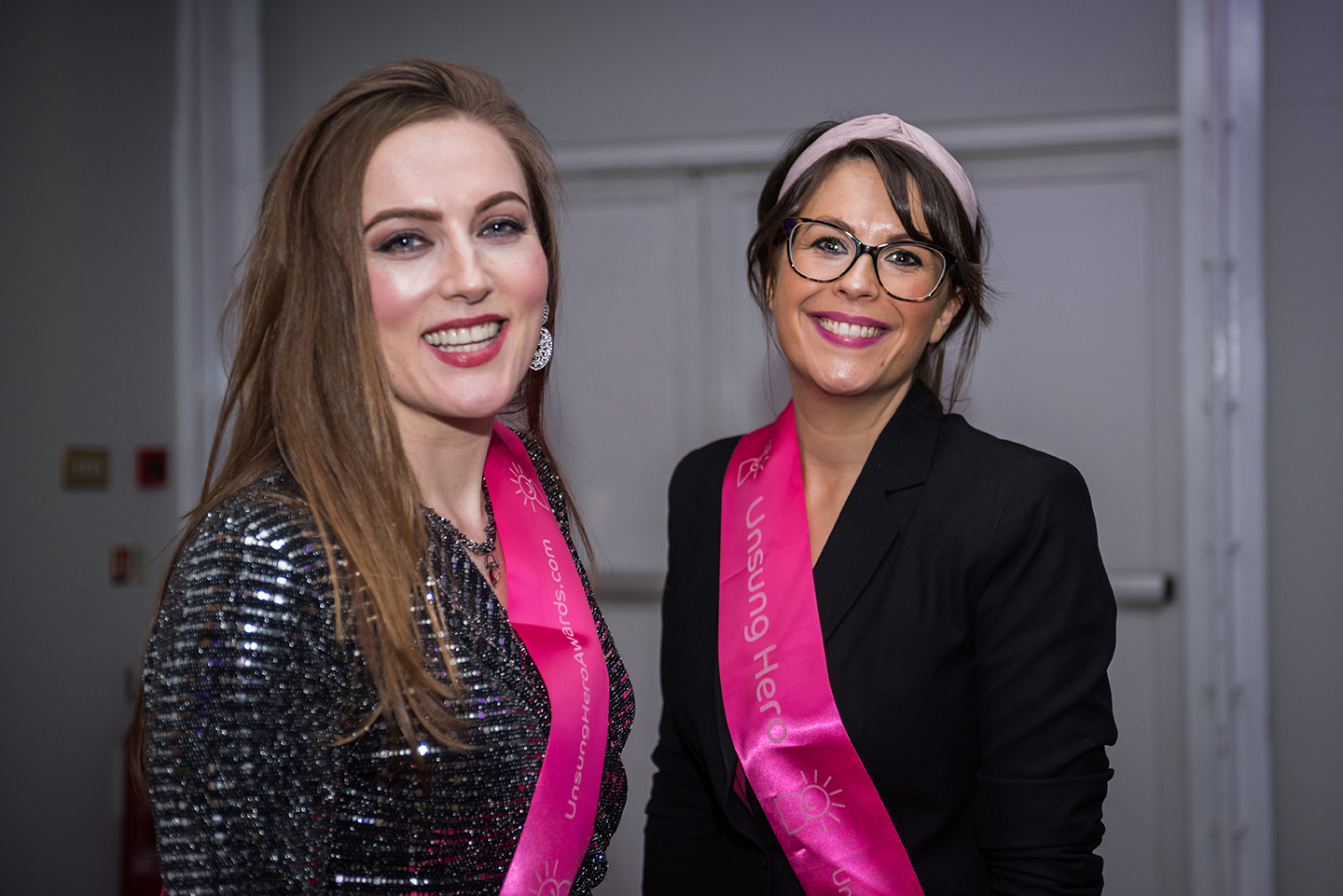 The Awards, thankfully, went ahead as scheduled and all eight winners were able to collect their trophies and certificates in person from MC Justin Moorhouse, who had the audience in stiches with his special brand of Northern comedic wit! Our Keynote speaker, Ellie Orton, gave a beautiful, humbling and touching personal account of how the charity she runs, NHS Charities Together, went from a team of around three people, to currently being staffed by thirty (still a small number of employees for a charity Ellie remarked), all whilst raising the most charity money in the shortest amount of time in UK history (currently at £130 million). 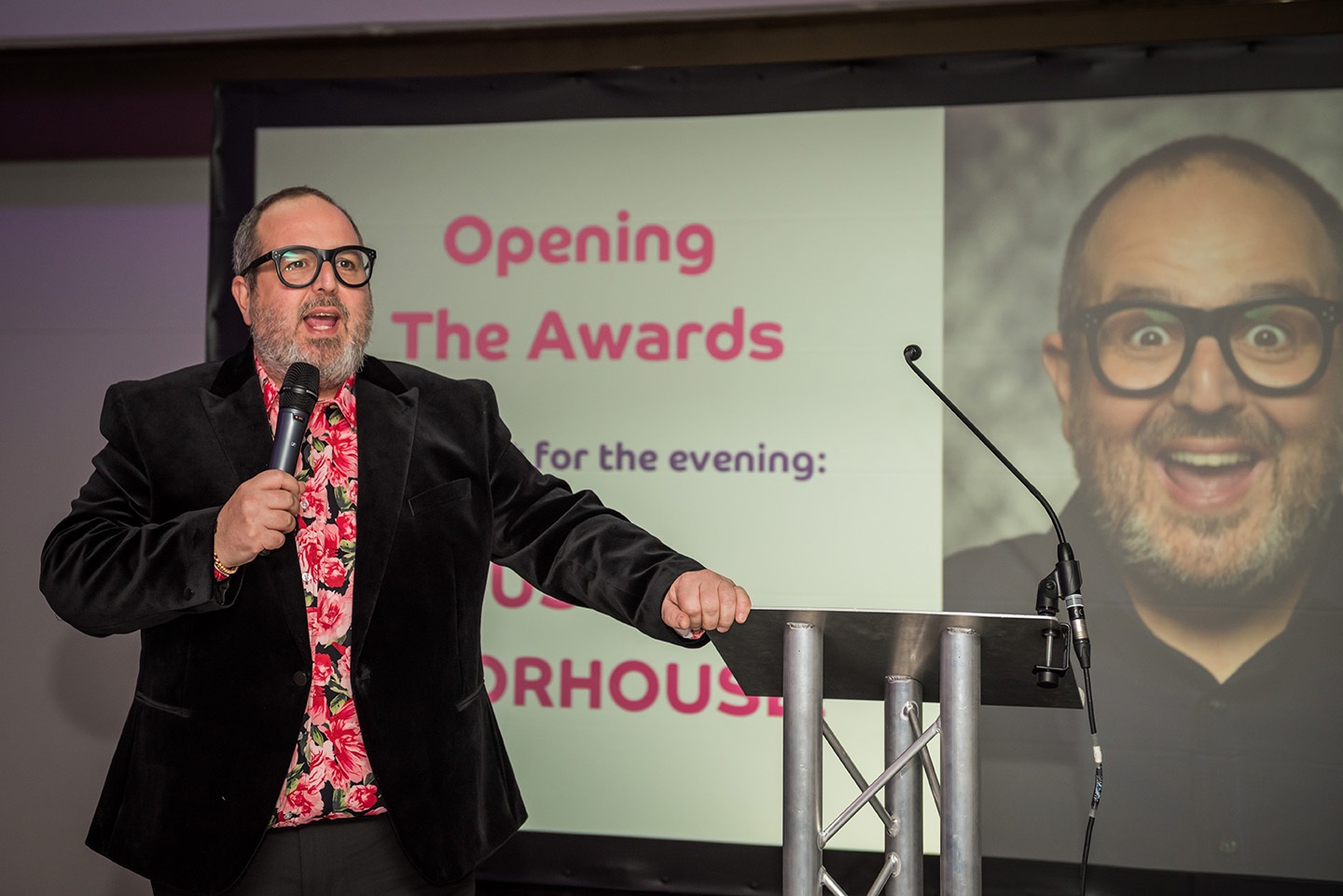 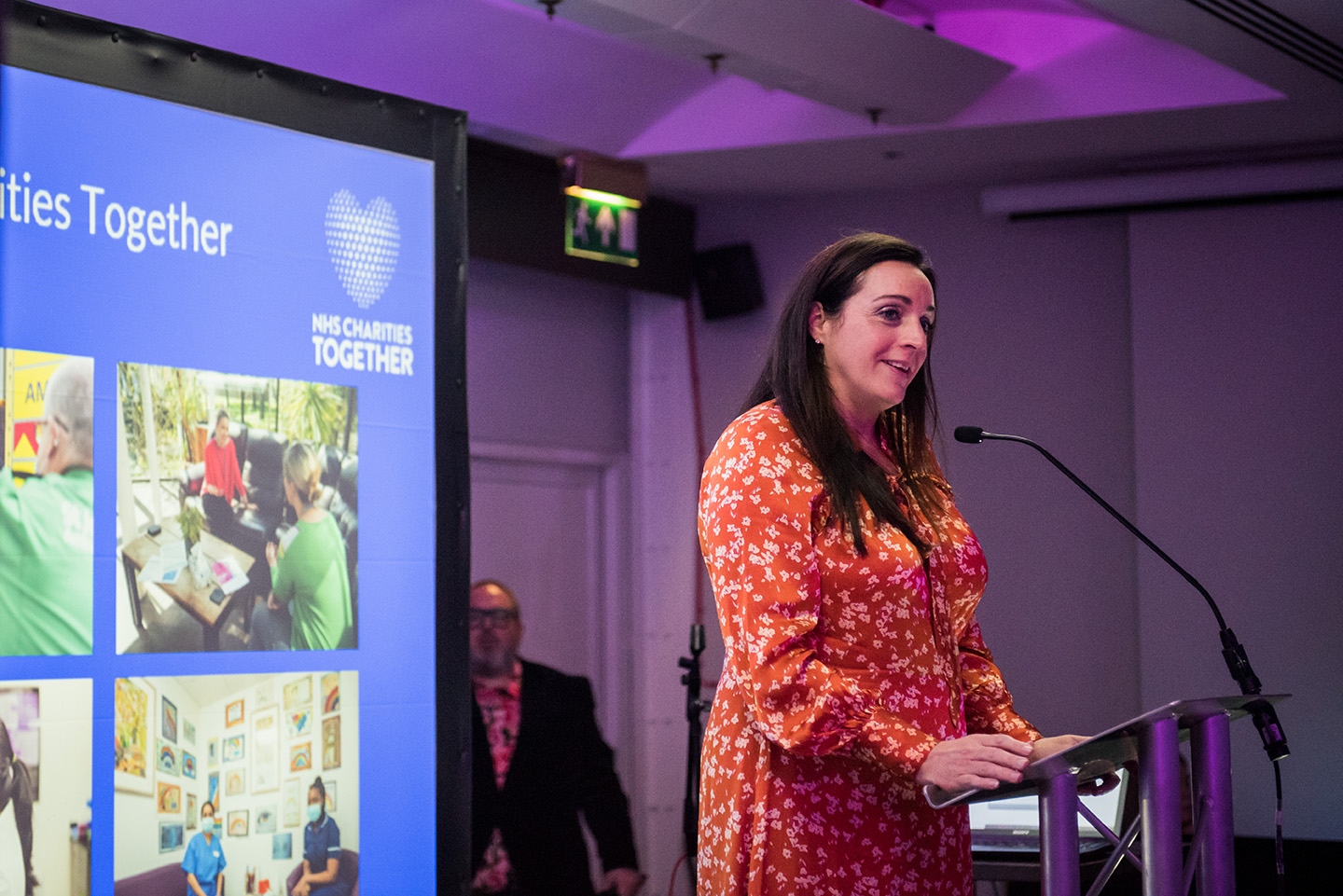 Our 2021 Winners ranged from Sabir Hussain, pictured with category Sponsor Matt Findel-Hawkins (left) CEO of TAP, who won for Public Choice. Sabir is an Award-Winning Music Promoter who since Lockdown has helped NHS staff with quality 24-hour music from his online Radio Station “British Asian Radio”. 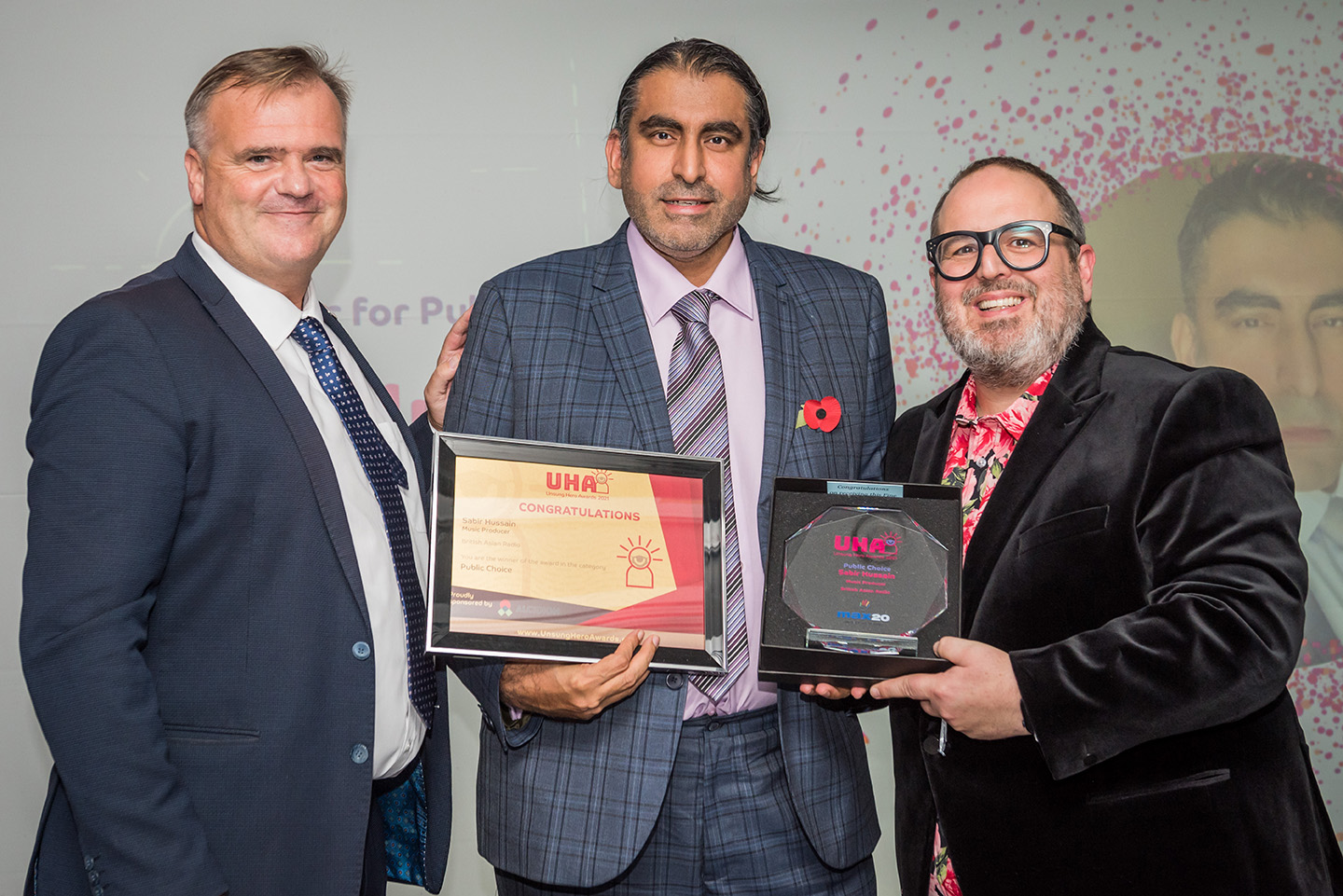 Catriona Rowland, pictured with 2021 Judge Jackie Shears, OBE (left), won for Mental Wellness Champion. Amongst many other things, Catriona has been the central driving force behind the formation and delivery of the new Health and Wellbeing Service at Newham Hospital. 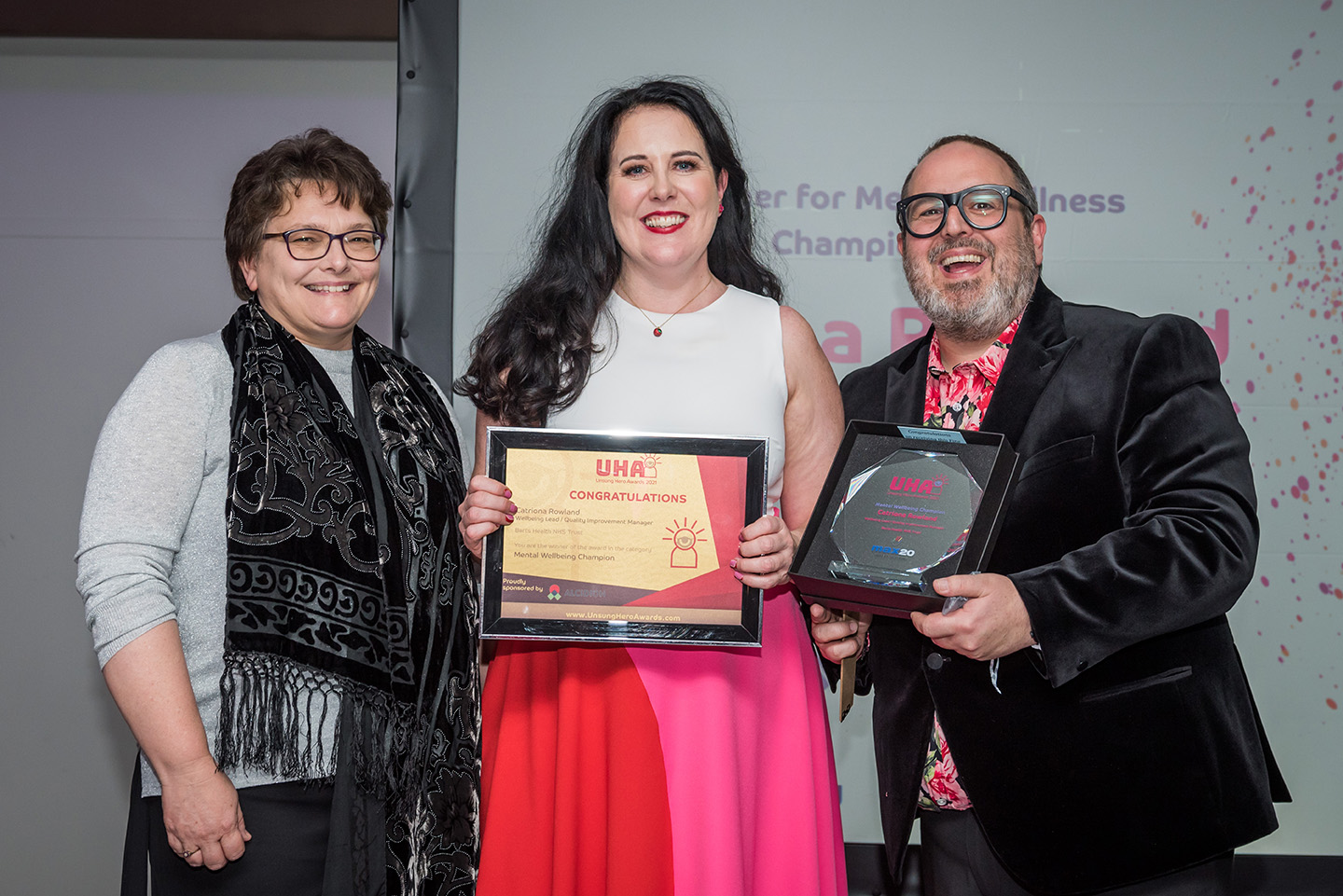 HR Operations Team, pictured with UHA Founder and Headline Sponsor Don Tomlinson from max20 Project Solutions won for Corporate Services and were critical to the pandemic, quickly mobilising a team comprising of HR, OH, Infection Prevention, Pathology, Clinical teams, and IT. Managing a Clinical pathway was a departure from the norm, but the team rose to the challenge! 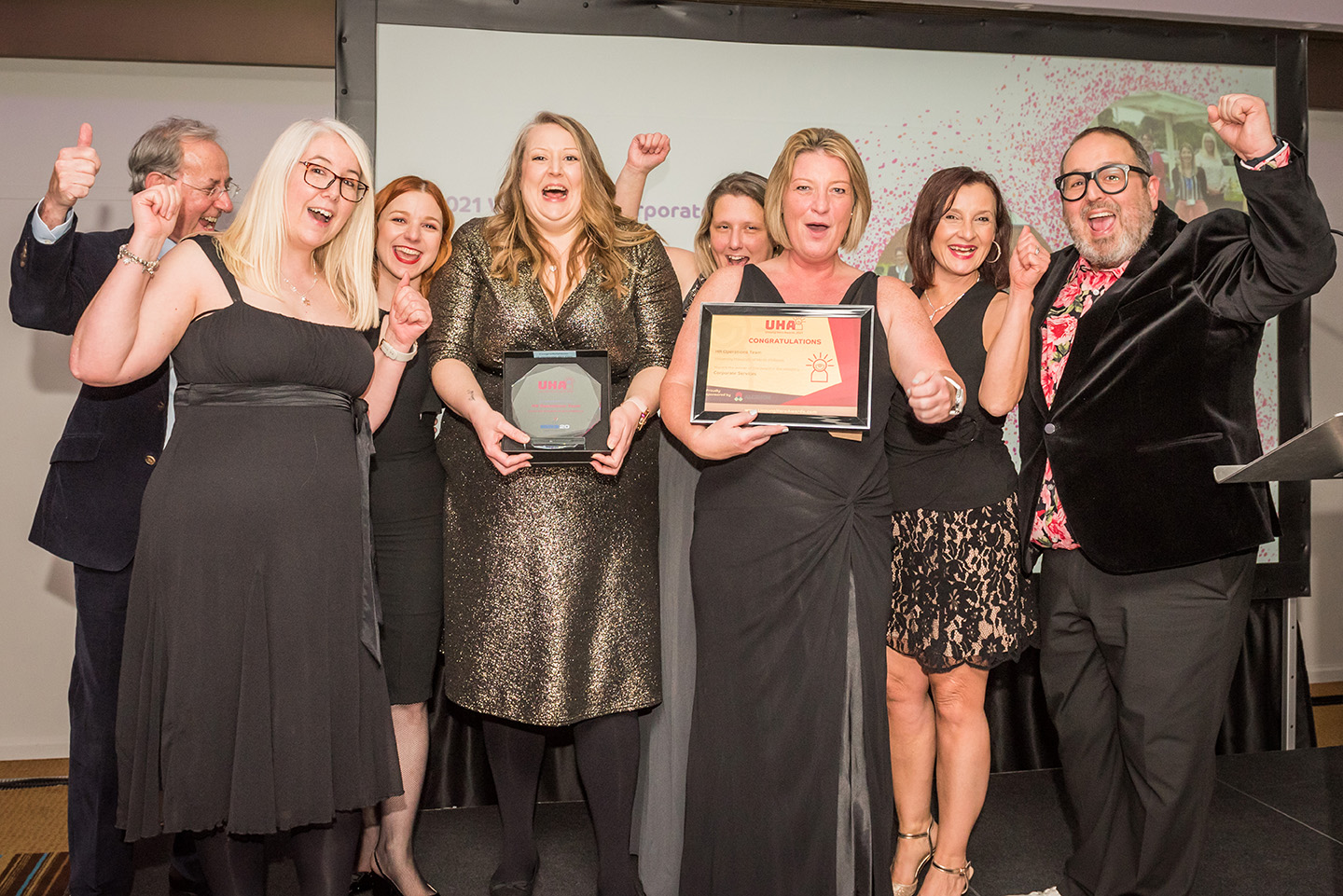 Paula Betterton, pictured with 2021 Judge and previous winner for Estates & Ancillary, Amanda Piper, from East London NHS Foundation Trust. Paula won as during the pandemic she took control early on within the Portering Team without being asked, supporting all the Driver Porters making sure that all patient appointments were kept, and transportation was covered, whilst covering what was needed for the day to day needs of her hospital. 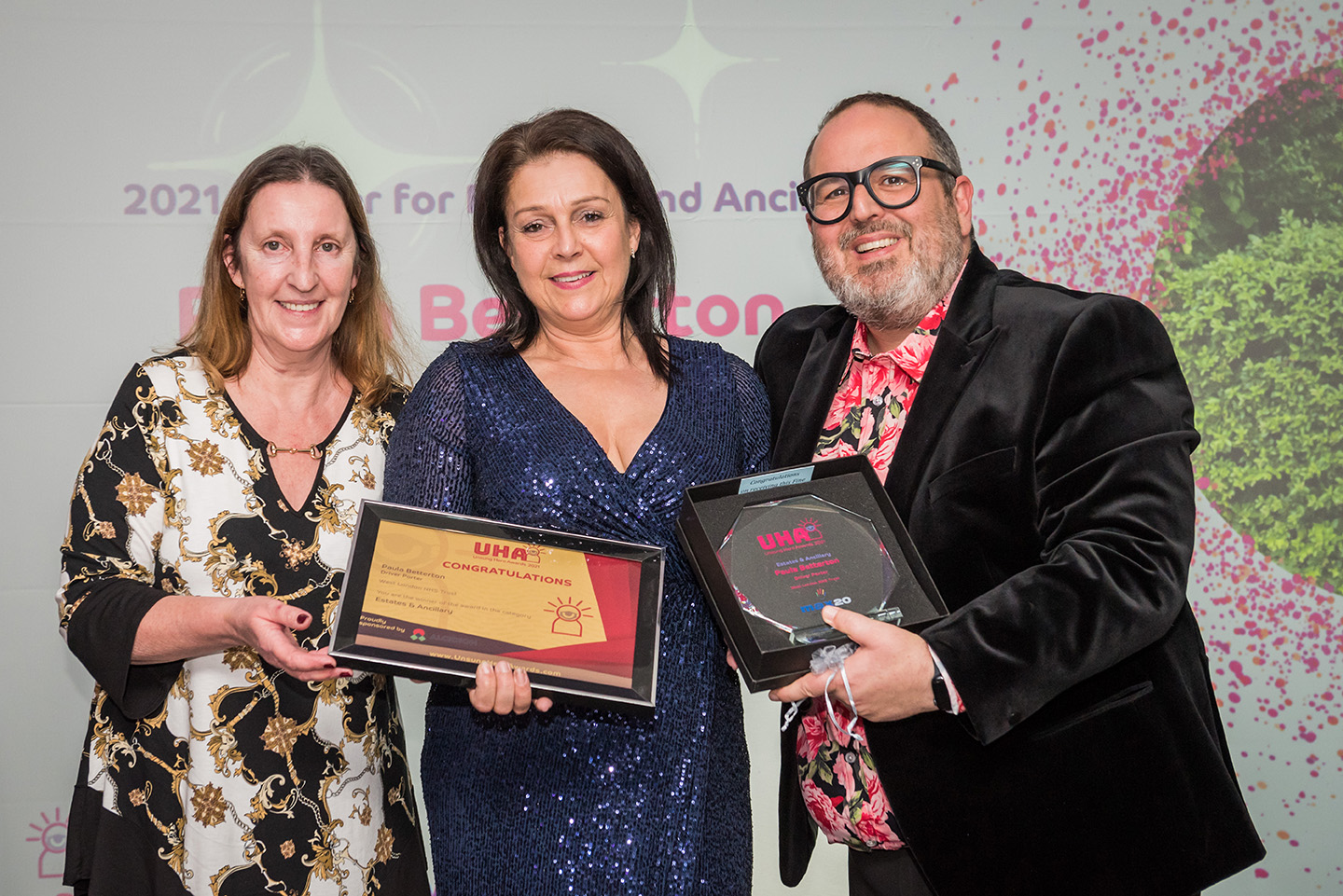 Margo Smith pictured with 2021 IT & Digital category Sponsor Nick Bigland from Alcidion won based off, amongst other things, supporting a digital process around ‘letter to a loved one’ for families to communicate with patients whilst there was no visiting, due to Covid. Margo also played a key role in digitally enabling over 2,000 staff to work from home in less than 2 weeks as the country went into lockdown. 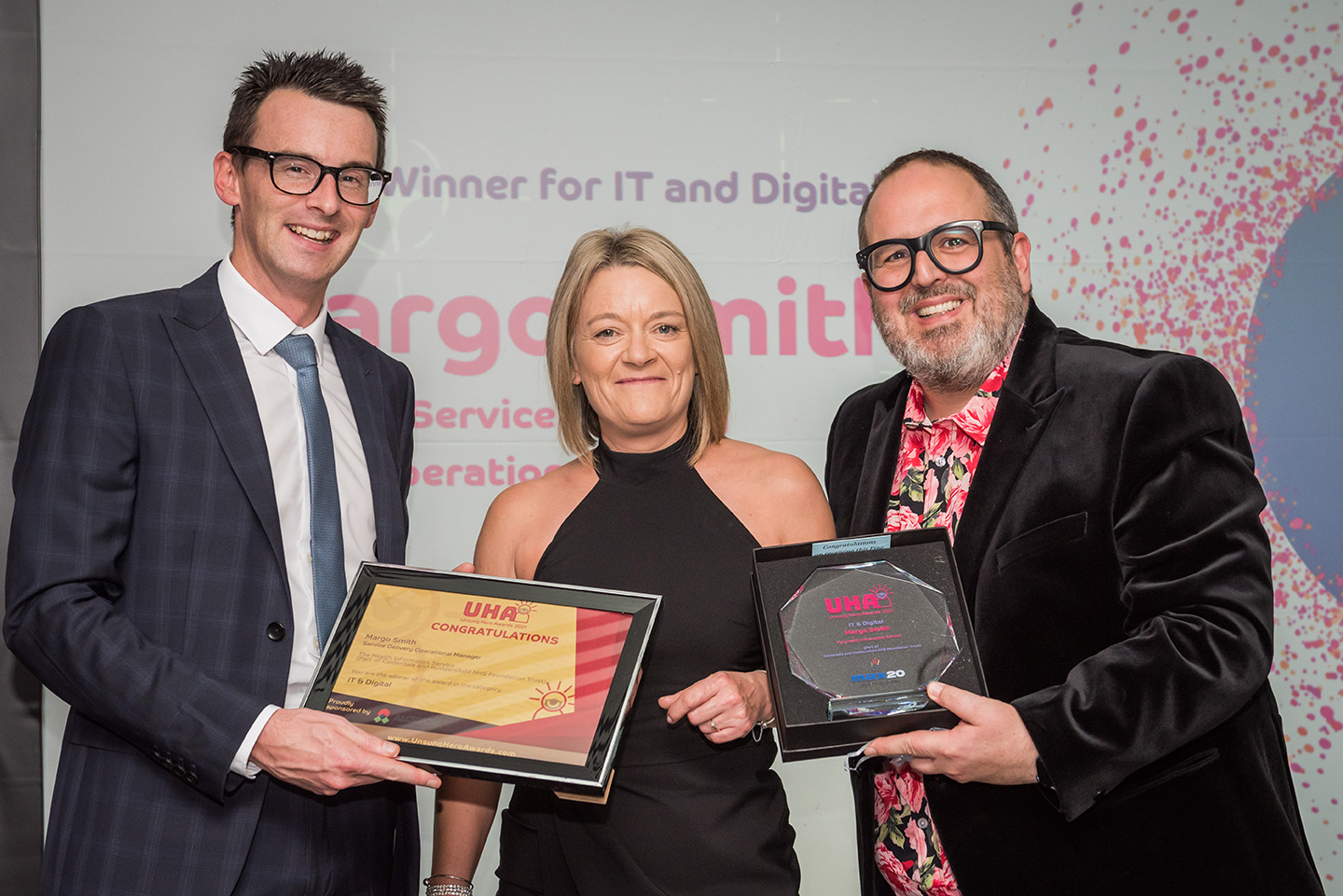 Sheila Bekoe, secretary at Pennine Care NHS Foundation Trust pictured with UHA Founder and Headline Sponsor Don Tomlinson from max20 Project Solutions. Sheila won in Admin & Clerical because at Christmas time she gave up much of her spare time to help struggling BAME families in the Greater Manchester area. All the families had children and many of the parents had lost their jobs due to Covid. Sheila sourced hundreds of items including toys, clothes and learning materials from Trust staff and spent her weekends carefully organising them. 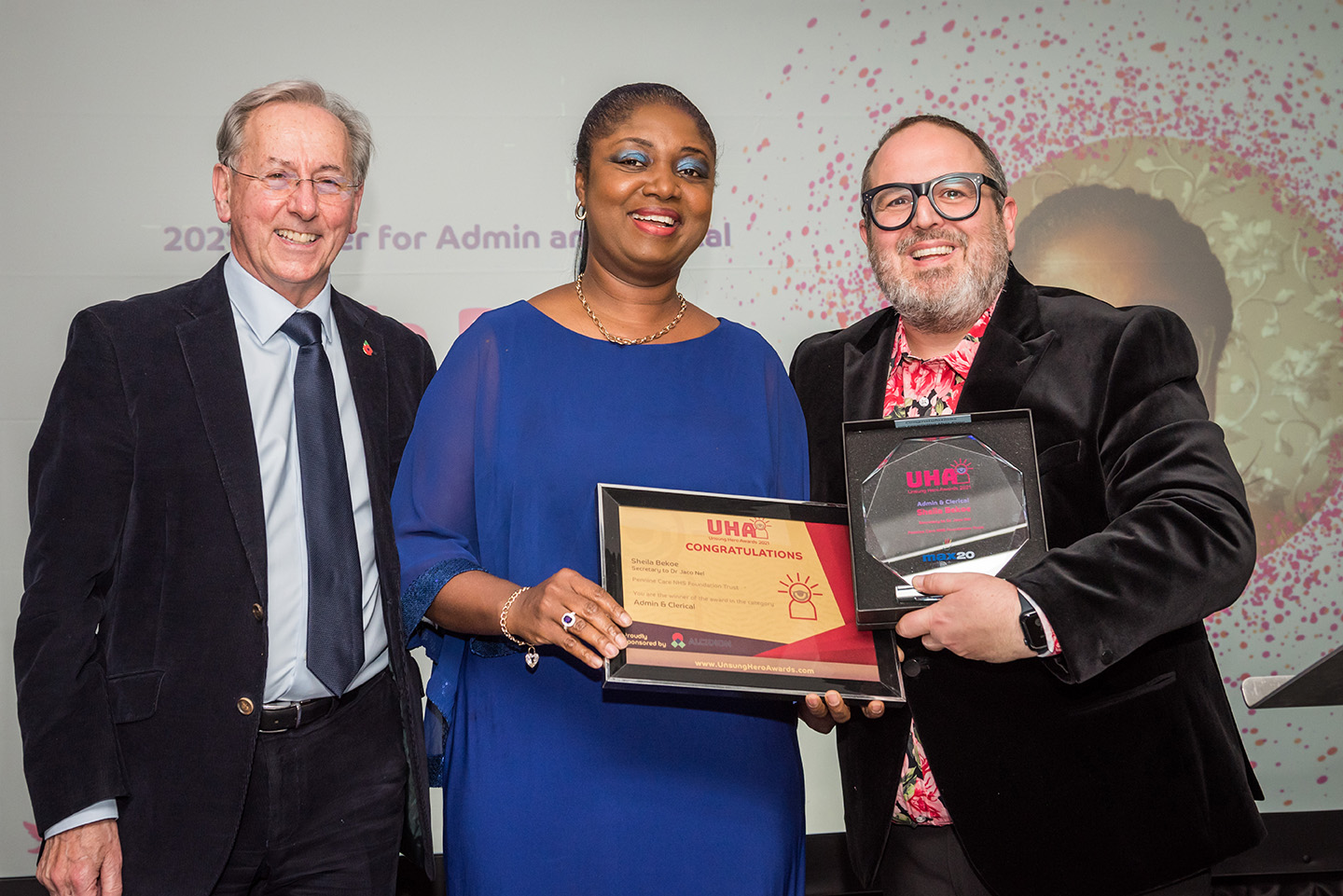 Lauren Eyers photographed with Leanne Shaw, Cluster Manager for Total People, won for Apprentice based off her self-motivation, calm and efficient manner, which enabled her to multi-task on any number of requests for communications support, from every corner of the hospital, while also managing her day-to-day workload. No task was too big! 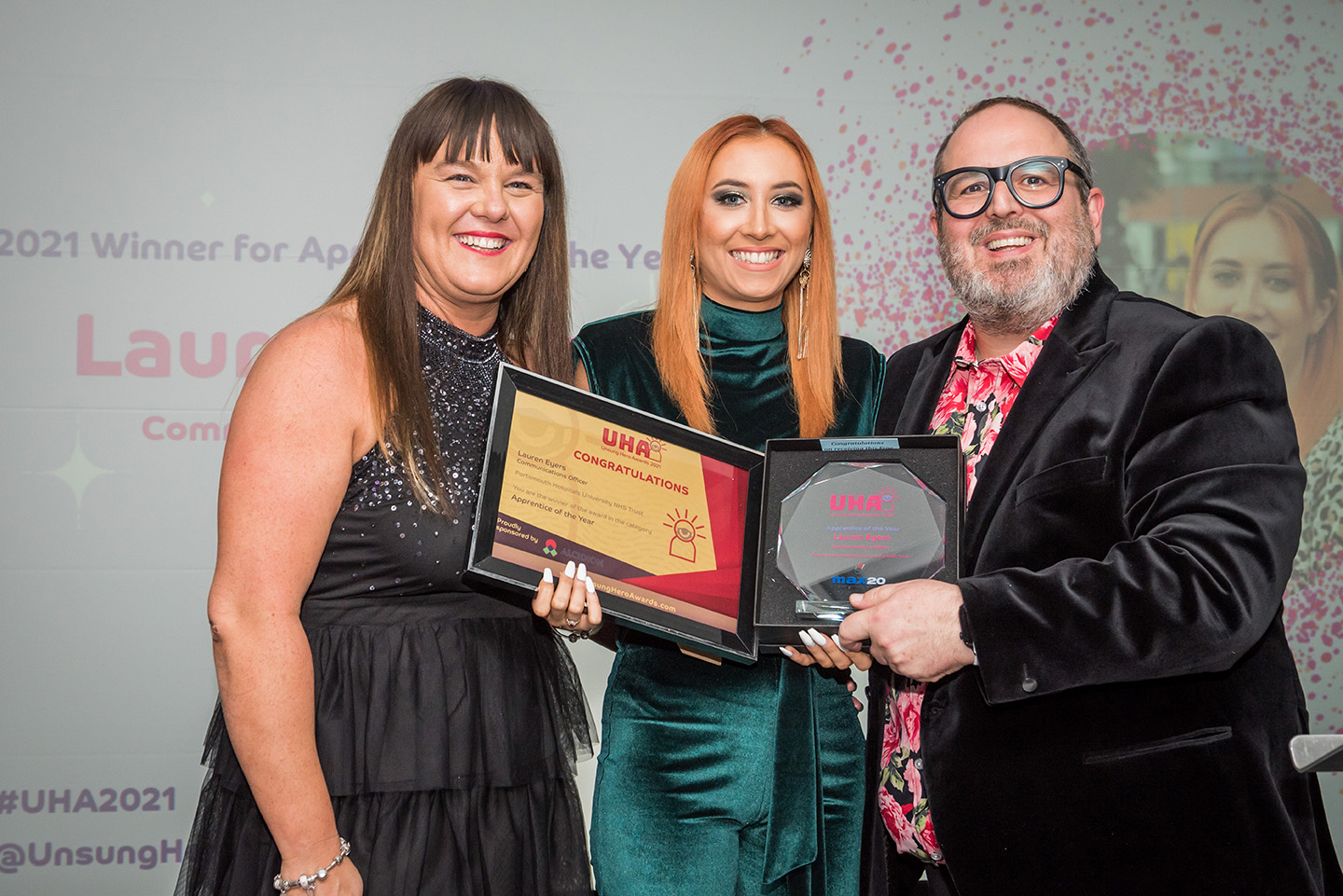 Lastly, our 2021 winner for Volunteer was Colin Ogden, pictured with 2021 Judge Richard Scarth from NHS Charities Together and Mark Lever, MD of helpforce. Colin had been quoted as being a standout member of the Volunteer Team at North Tees and Hartlepool NHS Foundation Trust. Since joining the Trust as a Volunteer Driver, Colin has been instrumental in the development of the service across the Trust. Colin pioneered the implementation of an Envelope Scheme whereby patients, if they wanted to, could donate to the Trust’s charitable funds. 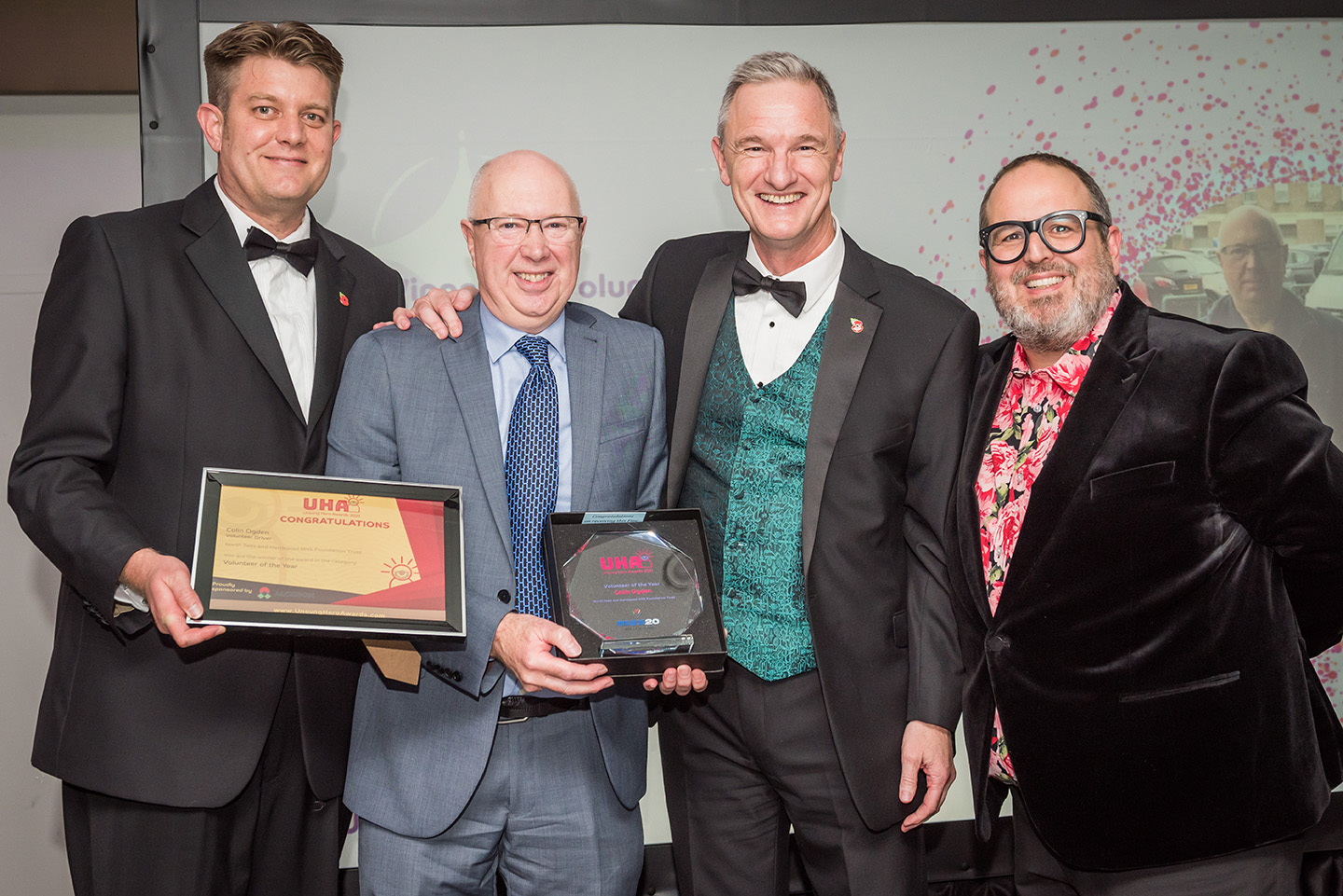 As the Awards portion of the night drew to a close, it was raffle time! Having the iconic Baby Bee designed by the talented artists at START on display at Salford Royal since June 2021, we decided it was the right time for the Bee raise some vital funds for another Hospital. That hospital is Oxford University Hospital NHS Foundation Trust, who we raised £1,000 on the night via raffle ticket sales. 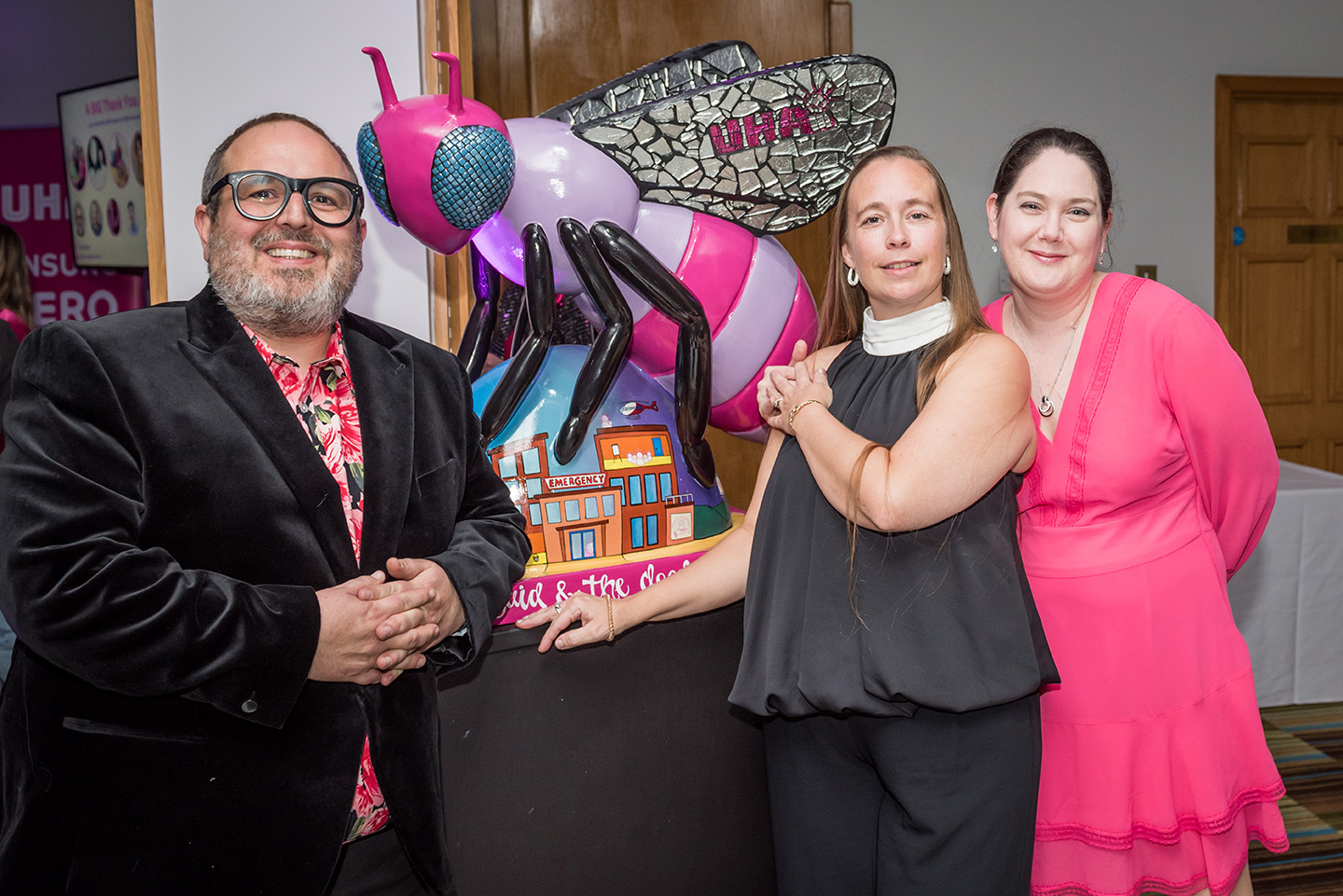 As the audience laughed, cheered, applauded, ate, drank, and danced the night away to resident singer Lisa Tomlinson, there was no sense that the 2021 Awards should have taken place anywhere else. The audience in the room felt positively connected and full of gratitude at having the opportunity, whether they won or otherwise, to be recognised for displaying a superhuman work ethic since May 2020. Now it was their time to enjoy! 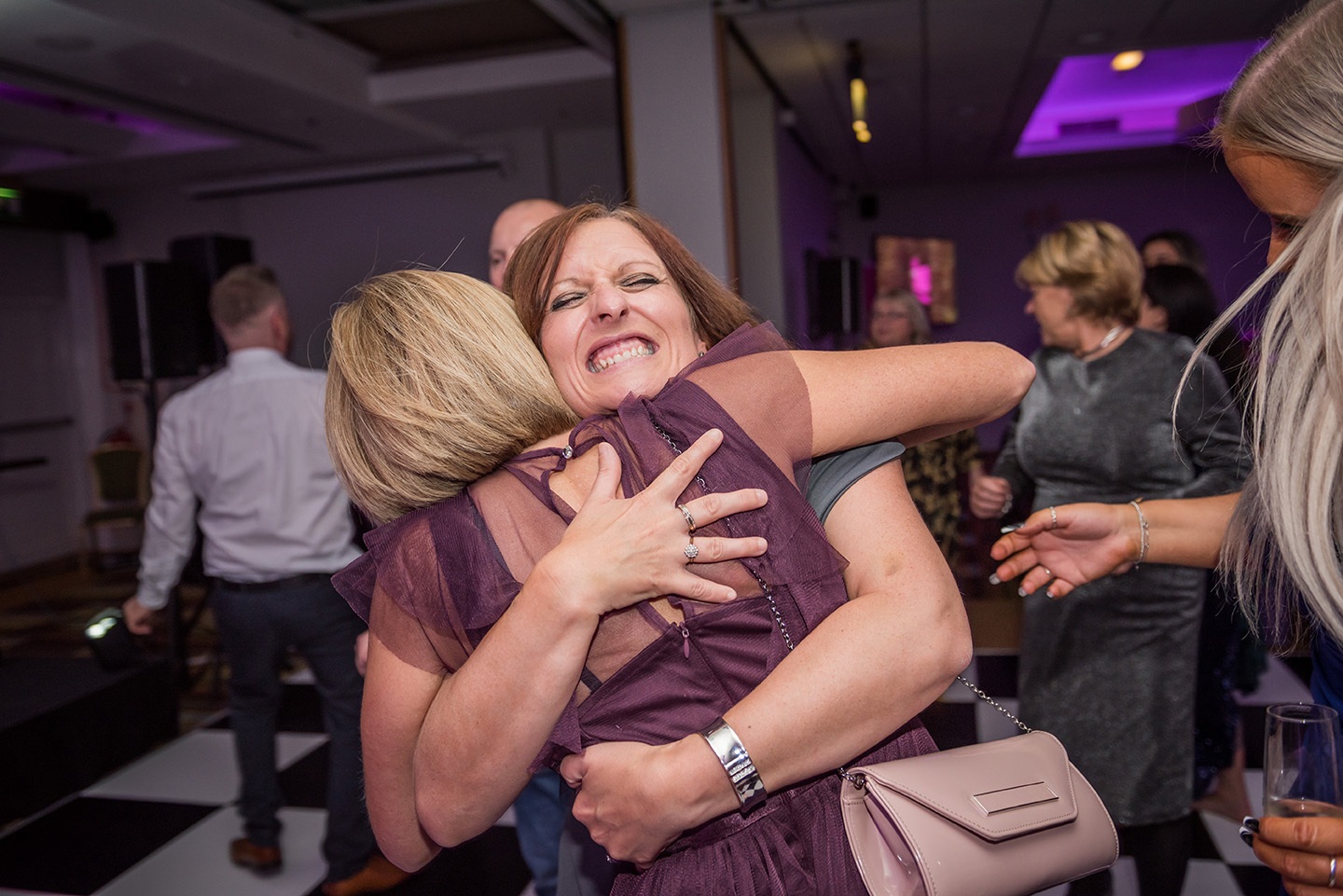 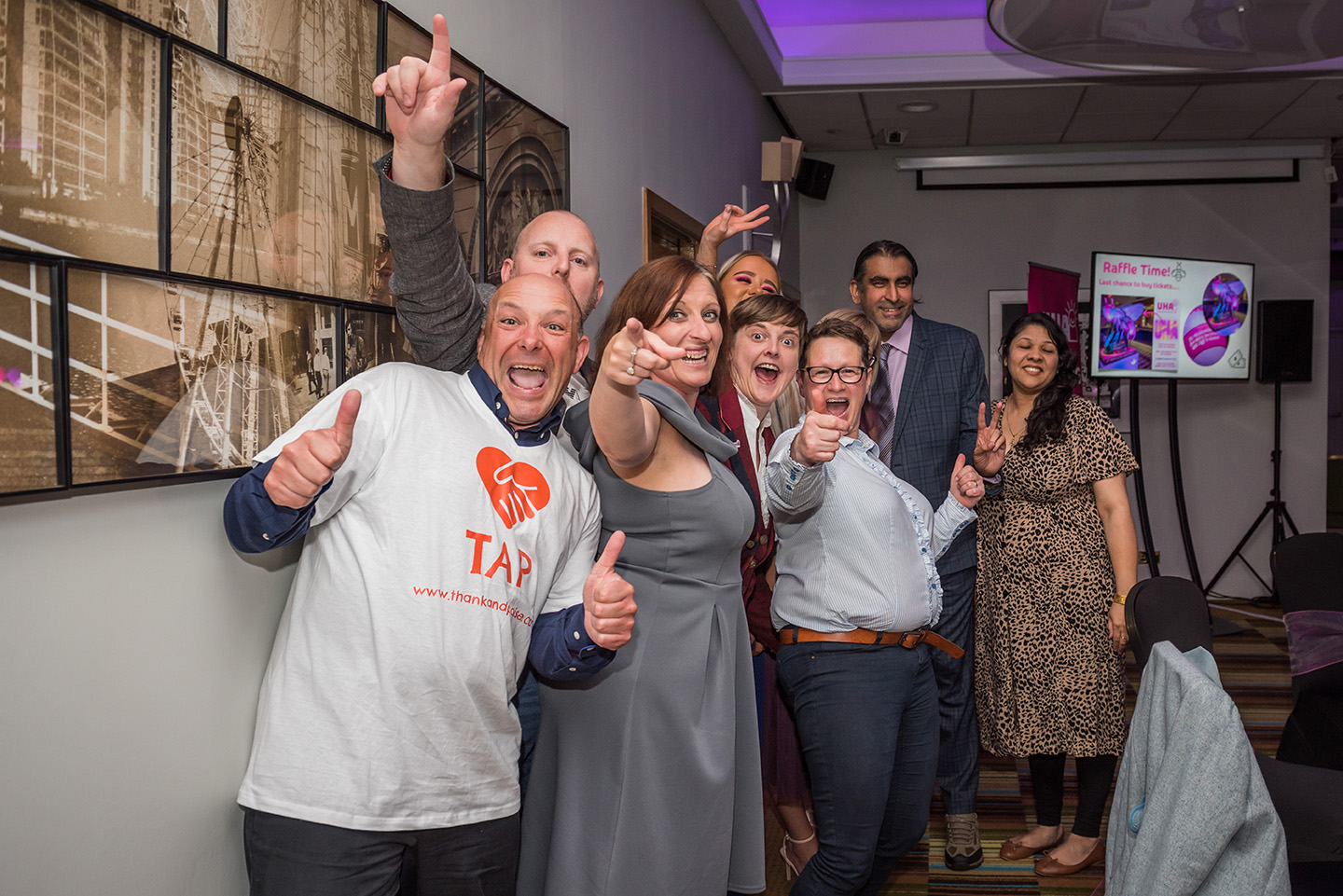 It’s true that the UHA, knocked down so unexpectedly, picked itself up, dusted off its magenta-coloured sash and just like the Unsung Heroes that it celebrates year on year: rolled up its sleeves and got to work putting on a night that many attendees have since commented will positively live on in their hearts and minds for many years to come. 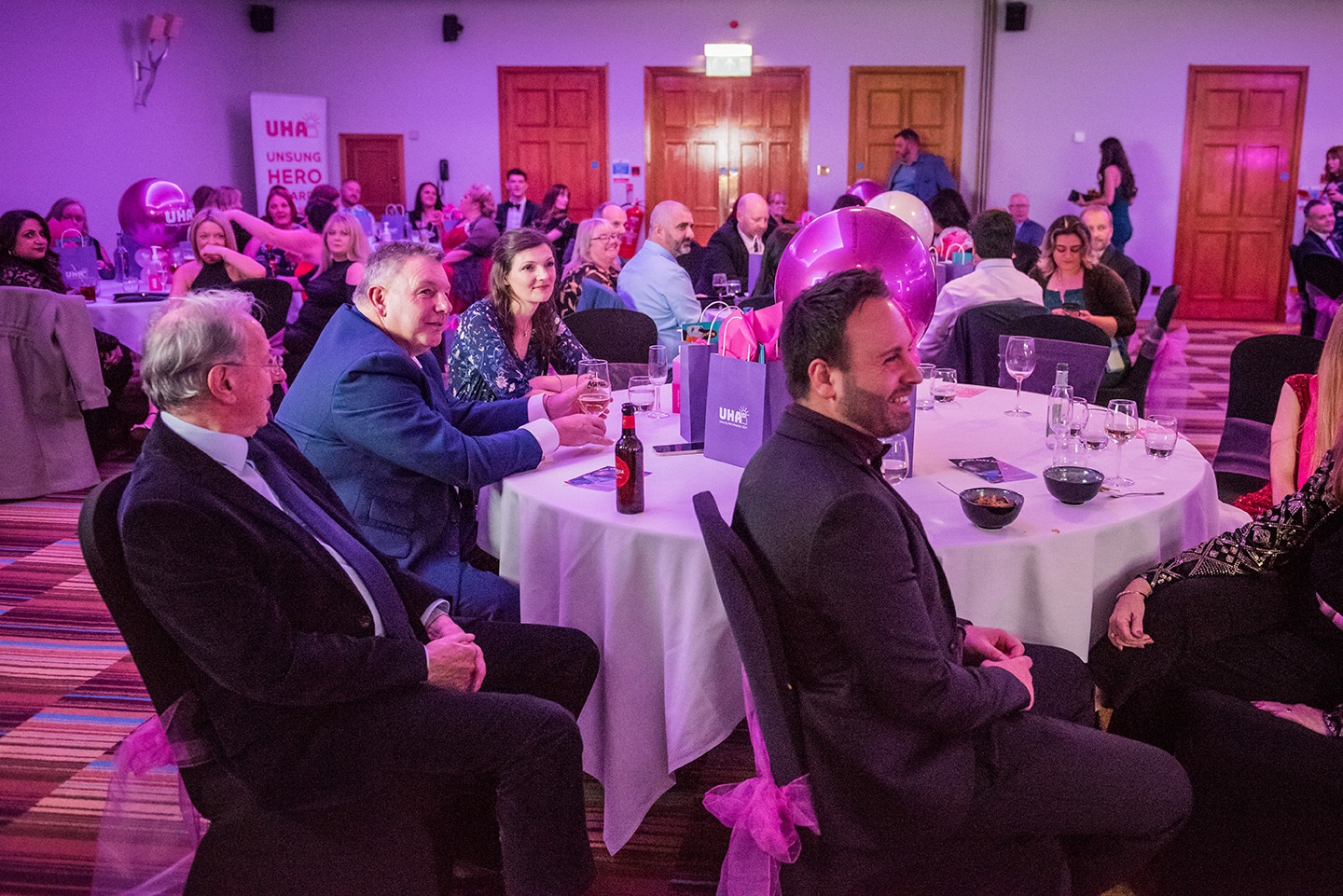 We must again thank all our 2021 Judges and 2021 Sponsors, the latter in particular, whose belief in the Awards helps to co-fund the event and allows us the continued opportunity to award all of our winners in style! 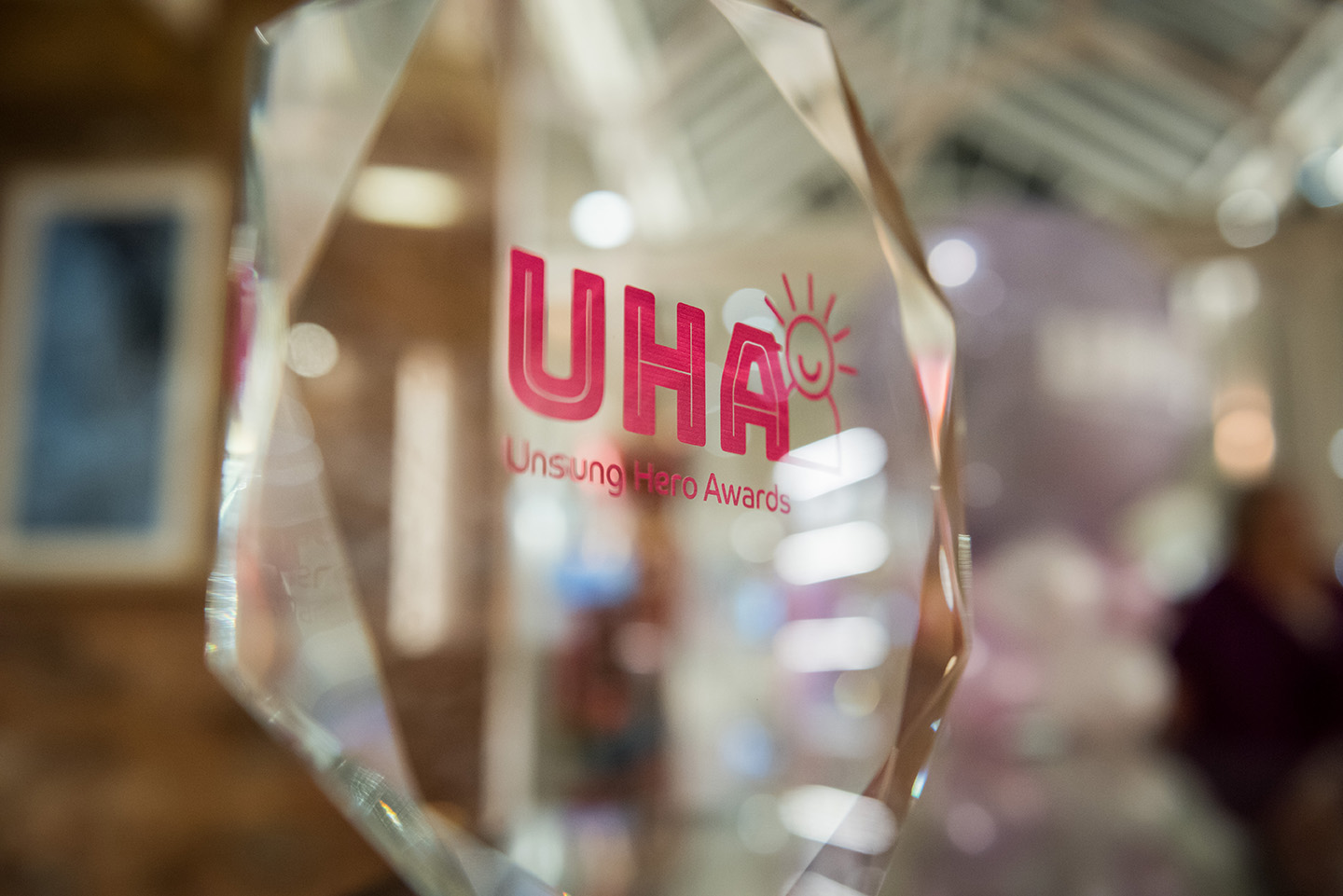